Read all about it on Amazon / Kindle – https://www.amazon.com/s/ref=nb_sb_…d-keywords=The+Conscience+of+a+Fair+go+nation 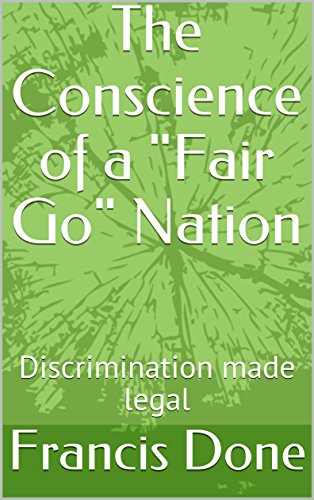 The fact that Singapore discriminates against its own citizens is supported by New Zealand which perpetuates this crime, although the 1993 New Zealand Human Rights Act clearly stated, discrimination by nationality, whether directly or indirectly is unlawful. A self-serving Chief Executive unfairly ruled against a group of already discriminated nationality, and the NZ Ministry of Justice participated in the complicity of his unprincipled action, disregarding that everyone is equal before the law (Bill of Rights and Human Rights Act, Privacy Act) as well as the Magna Carta which states theft of private property (CPF savings funded only by employer and employee contributions – like Kiwisaver) is unlawful.

Read about how Donald Trump’s ALTERNATIVE FACT has arrived in New Zealand where the High Court ruled the CPF savings of only one nationality (Singaporean) is a pension as well as become periodic allowances and that the CPF savings of Singaporeans are “granted” by the Singapore government.

What do you think?

Read all about how the Court of Appeal prevents Singaporeans from appealing the unfair decision of a High Court judge, that the CPF savings of Singaporeans belong to the NZ Ministry of Social Development (i.e. taxed 100%) while the CPF savings of their ex-Premier, SIR John Key and thousands of Kiwis who worked in Singapore and collected their CPF money are tax-free and belong only to them. If this is not DISCRIMINATION, what do you call it? Singaporeans are lesser beings than their own people?

Please support by signing this petition, thanks.

One country should never have the right to force you to give up your citizenship, especially NZ which is always trumpeting human rights values, fairness and justice and equality for all. In this case, New Zealand has allowed one self-serving civil servant, the Chief Executive of the Ministry of Social Development, Brendan Boyle to destroy all these basic human values –

The High Court judge Brewer has proven the non-independence of the NZ judiciary by stating that the CPF of Singaporeans are “in a sense” a pension but John Key’s CPF savings are his own.

CONFIRMED – High Court judge of New Zealand ruled CPF of Singaporeans belong to the NZ government while John Key’s CPF is his own savings.

To all decent folks out there – if you want this case to go to the Court of Appeal and the UN Human Rights Committee in New York and Geneva, please donate to the PayPal account of my friend danxin@hotmail.com for expenditure on legal advice, disbursements and miscellaneous expenses to bring this case forward, as nowadays, one must have money to gain a semblance of justice.  Any amount will be much appreciated.

Your kind donation will entitle you to the first installment of the e-Book “Donald Trump’s ALTERNATIVE FACT has arrived in New Zealand” available in one month’s time.

Under John Key, homelessness increased tremendously – he grew up in a State House; and he started selling off State Houses; isn’t this great upbringing?

Crime became rampant – lawlessness prevailed; burglary, robbery, assault, rapes, etc. Criminals were younger – a killer as young as 12 years old who is now out free after a couple of years in a youth detention facility.

Under his watch, houses in New Zealand became unaffordable for first-home buyers, more than doubling in price the last three years – an average house (cold, damp and moldy) in Auckland is a million dollars.

His motto in life, “If it is not MY problem, it is not a problem.”

Does the British Club, Dutch Club, German Club, American Club, Korean Club – all in Singapore – advise their citizens to give up their citizenship?

What kind of UPBRINGING …… PART II

Please read the above Letter to the Editor.

He is the leader of the country and had preached to the UN General Assembly, that “we got to do the right thing” during the Syrian refugee crisis in Europe.

Easy to talk but why does he not do the right thing and take charge to correct the DISCRIMINATION against Singapore Citizens who are permanent residents of NZ?

Instead, he supports the DISCRIMINATION against ONE NATIONALITY perpetrated by his Chief Executive  of the  NZ Ministry of Social Development  –  to support is to condone.

Therefore, he is just as guilty of unlawful DISCRIMINATION under the NZ Human Rights Act 1993 as his Chief Executive.

People in high authority should have even higher standards of MORAL Leadership. Instead, he has led the country stray from the path of righteousness and JUSTICE.

John Key has delivered his final speech to Parliament – “It has been a privilege, an honour and a blast. Goodbye and good luck”

He certainly had the privilege of collecting his TAX-FREE Singapore CPF Savings! And it certainly has been a blast!

Key said he was by nature a pragmatist and not an ideologue. Some people had said that showed a lack of clear principles, Key said, but that wasn’t true. He got his from his upbringing and not a “politics 101 textbook”.

Dear Mr Key, how is it not true? You collected your CPF savings but you allow your lying, cheating, self-serving Chief Executive of MSD to confiscate the CPF savings of Singaporean Permanent Residents of New Zealand by calling the CPF a pension only for Singaporeans and not for other nationalities? Does this not show a total lack of clear principles?

What kind of upbringing did you have when you do not practice the basic concept of RIGHT and WRONG – your CPF is your own while the CPF savings of Singaporeans belong to the New Zealand government?

THE DANGERS OF WILLFUL BLINDNESS

Please watch the video on The DANGERS of WILLFUL BLINDNESS – How many people cheated of their savings by the Chief Executive of the Ministry of Social Development SPEAK UP?

Some people are BLIND out of FEAR but the people who STAND UP for their RIGHTS “are people of immense persistence, incredible patience and an absolute determination not to be blind and not to be silent”.